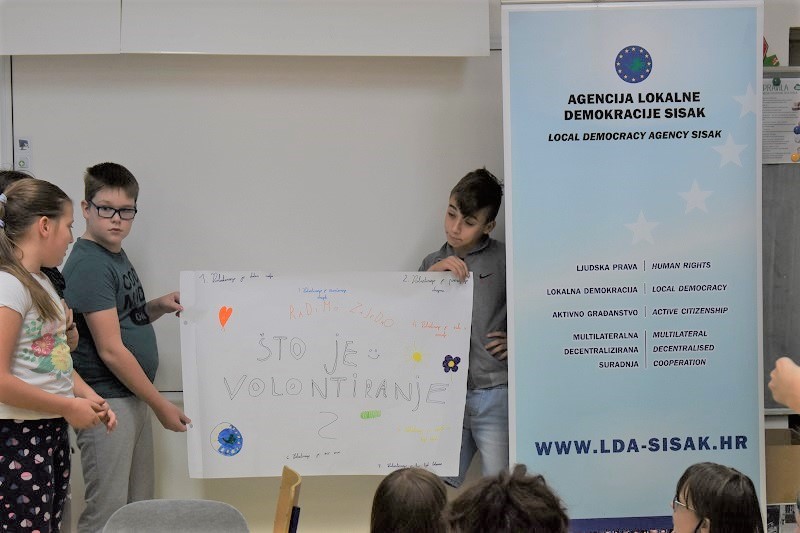 Elementary school Budasevo-Toplovac-Gušće, nearby Sisak, hosted on the 2 October 2020, the LDA Sisak staff who conducted educational workshop on volunteering for the 5th grade pupils. Interactive methods provided educational moments but creative ones as well, since the pupils designed future volunteer actions they will implement within their school by the end of this year.

The workshop was graded very high, especially poster making and team work. The pupils said they learn many new things, for example:

LDA Sisak staff and the school’ teachers and pedagogics will continue to provide educational and informative support to the pupils, members of the school’ volunteer’ club, in implementation of their volunteer actions and in strengthening youth voluntary activities.

The views expressed in this text are the sole responsibility of the Local Democracy Agency Sisak and do not necessarily reflect the opinion of the City of Sisak nor the Ministry.

Development of new competences through volunteering

During long-term volunteering, volunteer acquire new knowledge, skills and attitudes – competences – that records in a Certificate of Competences Acquired During Volunteer Work. These competences are recorded in the Certificate which volunteers use for their personal...

That volunteering is fun and useful the first grade students of the Sisak Gymnasium witnessed during the educational workshop on volunteering held on the 5 November 2020 by Local Democracy Agency Sisak. Despite the real autumn weather, adhering to epidemiological...

Everything counts in volunteering!

Educational workshop “Being a Volunteer” was held on the 21 October 2020 in the elementary school Braća Ribar in Sisak conducted by the Local Democracy Agency Sisak staff and attended by the 5th grade pupils. The majority of participants have no previous experiences...