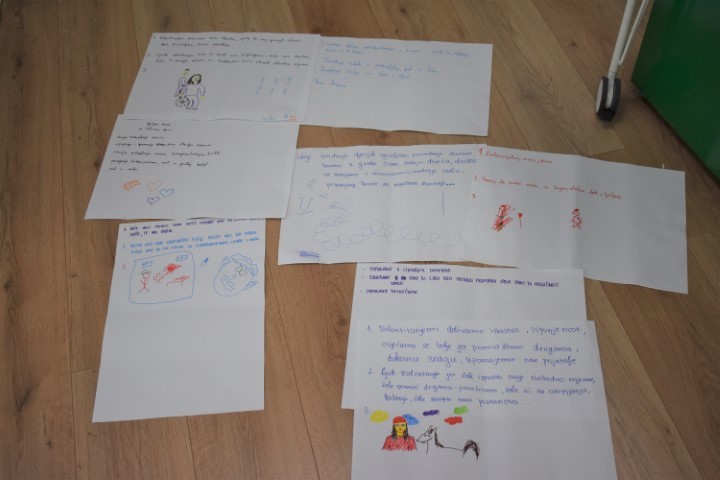 That volunteering is fun and useful the first grade students of the Sisak Gymnasium witnessed during the educational workshop on volunteering held on the 5 November 2020 by Local Democracy Agency Sisak.

Despite the real autumn weather, adhering to epidemiological measures, 19 students of the new generation of Gymnasium students generously learned something new about volunteering, its values ​​and benefits, the Law on Volunteering, and on including in the school volunteer club VoGSi which was officially opened at the beginning of the year 2020.

Regardless of their previous volunteer experience, the students showed that they are familiar with the Law to some extends and aware that volunteers and volunteering organisers must respect each other’s rights and obligations. Creativity and critical thinking in the work of these smart, young people has resulted in numerous ideas for the implementation of volunteer actions within the school but in local community as well.

Humanitarian actions, volunteering with vulnerable groups through sports activities, spending free time and organising thematic events for elderly, planting and cultivating seasonal plants, maintaining and tiding up the school exterior and interior, , animal protection, fixing children’s playgrounds are volunteer activities by which students would like to make their community a more beautiful and pleasant place for them and other citizens to live in because, as they said – where there is will, there is a way!

Through participation in the school volunteer club and the school’s cooperation with the Local Democracy Agency Sisak and the Sisak Volunteer Center, students will have the opportunity to design numerous volunteer activities, participate in peer workshops, prepare club promotional activities and establish cooperation with other institutions and organisations in Sisak. Until the end of this year, they will implement two 2 volunteer actions which will be promoted at this web site and on social media.

The views expressed in this text are the sole responsibility of the Local Democracy Agency Sisak and do not necessarily reflect the views of the City of Sisak nor the Ministry.