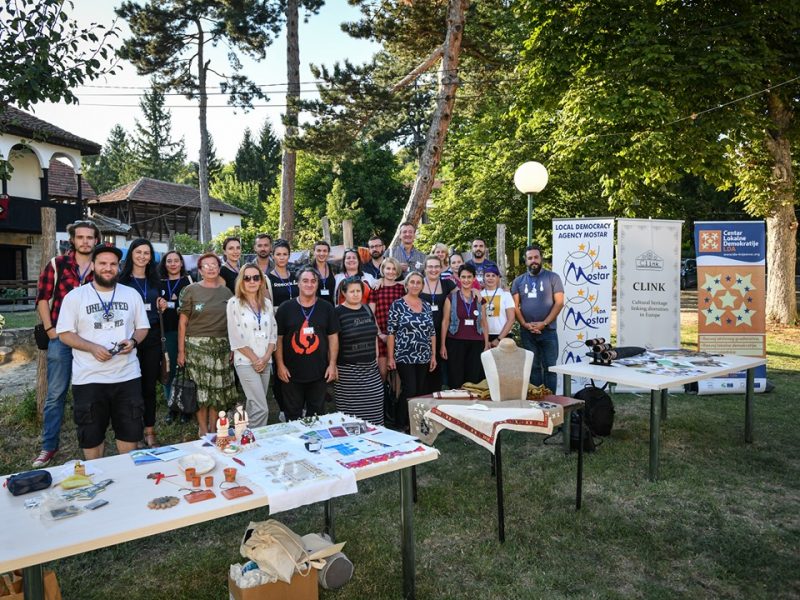 Within the project “CLINK – Cultural Heritage Linking Diversities in Europe”, sponsored by the Local Democracy Agency of Mostar, whose one of the partners is Local Democracy Agency Sisak, aiming to strengthen the link between European and non-European countries and the cultural heritage that surrounds them. On September 12-13, 2019, the 2nd international gathering was held in Knjaževac, Serbia, where good practices were exchanged as part of the event “Cultural Heritage as a Source of Urban Renewal: The Return of a Craft-Making Culture.”

This two-day event began with a meeting of the project team to discuss the implementation of local activities and the implementation of “pop-up gallery” activities where young artists inspired by the local cultural heritage will exhibit their work. The partners took part in a guided tour of Knjazevac where their cultural heritage was presented to them. After that, the Best Practices Fair was organized in the Ravna archeo-ethno complex. More than 80 representatives of various domestic and foreign organizations visited the Fair and participated in the presentation on the use of traditional crafts for the purpose of economic development and the return of crafts in the field of urban culture. This is a testament to how different artistic skills can be used productively through leisure and turn it into a rich heritage or professional career.

Numerous entrepreneurs, young designers, craftsmen and representatives of civil society from ten different countries and local communities gathered in one place to exchange practices of creative and sustainable use of cultural heritage for the social and economic development of communities. In addition to Paula Raužan from the Local Democracy Agency in Sisak, Martina Mladenović presented her examples of good practice in front of the Banovina Heritage Interpretation Center in Petrinja.

The project “CLINK – Cultural Heritage Linking Diversities in Europe” was funded by EU funds through the Europe for Citizens Program and implemented by 10 partners from Croatia, France, Greece, Bosnia and Herzegovina, Serbia, Montenegro and Albania.