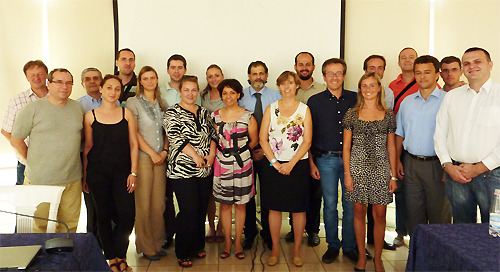 “The meeting was extremely successful and showed the results and the perspectives for the future. A special good opportunity is offered by our new presence in Albania and the LDA in Skodra, even if we aware of the difficulties” said the Director of ALDA, Mrs Antonella Valmorbida, who was there on behalf of ALDA. The participants assessed the outcome of the past year of activities with almost 2.000.000 euro funds disbursed with the support of the LDAs. Unfortunately, the scheme could not be implemented in Bosnia and Herzegovina.

The next months, called “Bridging activities” will be dedicated to the implementation of the project with the second part of the capital provided by the Council of Europe Bank, as it was described by Ilaria Olstini and Michel Bongiorno, from Intesa San Paolo Milano.

The whole programme and actors are preparing the next three years activities that will be also presented to the possible support of the Norwegian Ministry of Foreign Affairs. As for ALDA network, the Bridging activity is supported by the Trust Fund of the Council of Europe Bank.

The programme in Albania will also be identified in the next few months. However, the results of the meeting in Tirana gave to all a positive perspective of this new coming country in the programme.